Culling your Roosters, Managing your Flock.

We beheaded a rooster yesterday. It was not a cheerful day for us.

A homesteader is responsible for the quality of life and death of the animals in their care.  I shirked the death part for several weeks (months really.) Everyone suffered because of it.  These roosters were obnoxious. They seemed to compete with one another for who could crow the most often and the loudest.

I tried everything, followed all kinds of “helpful” but ineffective advice and of course tried to give them away. No one wants a rooster though. There are a kazillion on kijiji right now “to give away, FREE!” A lot of people are hoping to avoid facing this reality. Farmers do things for a reason. When you are living the life you really start to understand this at a real level.  Culling is a reality that we must face if we have too many roosters in the flock. Deciding which ones stay and which ones go can be quite difficult.  Especially when they are all behaving badly.

Perhaps you have a mixed flock and want to breed, perhaps you don’t really need any roosters at all. You just have to watch and observe and try to decide which will be the better guardians of the flock. My favourite rooster turned out to be the worst flock guardian ever. He had the girls freaking out in panic over things like a leaf falling on the ground in front of him. I made a bad call based on looks rather than temperament. 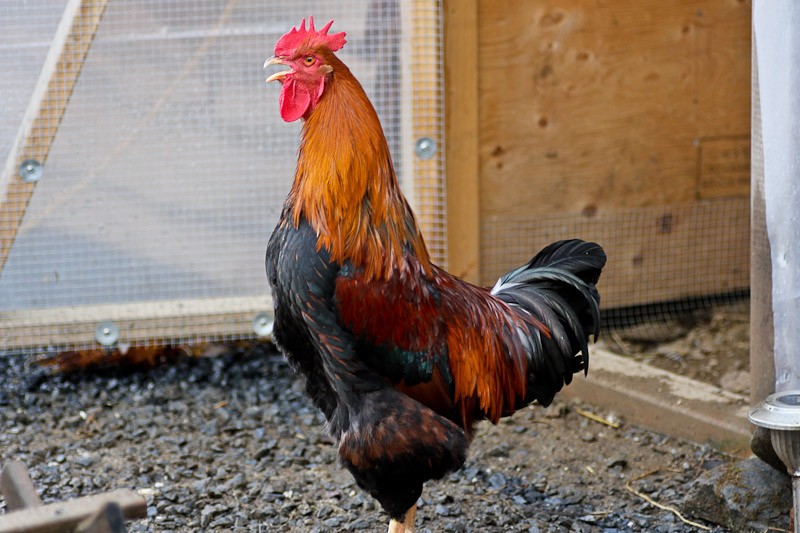 cock-a-doodle-doo …who knew they can do this thirteen times in a row, dozens of times a day!

When we first started keeping chickens we picked up our box of teeny chicks and  knew there would be some roosters, and that some would need to be culled and either re-homed or butchered.  We talked about it. Read about it. Agreed to it. But “knowing” at the time and “doing” when it came time to cull them were two different things entirely .. if you know what I mean. You get attached to these odd creatures.

Our first time around we ended up with six roosters and eight hens. We managed to give away four roosters and were left with two. If you are interested you can read about that experience here.  In the Autumn when we were dealing with this, I thought we should keep one rooster so that we would have the option of hatching some eggs. Roosters are beautiful creatures with their majestic combs and flashy tail feathers. A roosters crowing when delivered in moderation is also a bit of a novelty.  You almost can’t help yourself from wanting to keep one around.

No one took the fifth extra rooster, so I just decided to “see how it goes” and keep both of them. Keeping both roosters with the hens was not a good decision to make. When it comes to farm animals, emotional decisions that ignore facts and logic never, ever, ever work out. Ever.

Spring arrived and our hens were suddenly overwhelmed by two roosters, and not in a happy way. There was fighting, fleeing, bleeding, pecking, squabbling, shrieking and egg eating. The peaceful hen house devolved into a war zone in a matter of two weeks. Everything becomes a lot harder when the balance gets off kilter and it takes quite a while for things to settle back down after the problem is dealt with. Our egg production has dropped this week as a consequence to all the stress the hens have been under.

Do yourself a favour: if you are just getting into keeping chickens be ready with a plan and stick with it. You should have only one rooster for eight to a dozen hens housed together . Not keeping any roosters is also a good option if you do not need to have any of the eggs fertilized and are not keeping chickens for meat.  You can house roosters separately if you have sufficient accommodations and don’t mind the crowing.   If you have too many roosters in the hen house the girls will suffer.

Why can’t they just all get along?

Chickens have a strict pecking order and they are downright cruel to each other during the process of establishing this order. Remove a bird and in just a day the whole structure changes. Bring the bird back and everyone pecks at it and beats up on it until it submits to its new place or fights for a higher ranking. Roosters become trouble once they hit sexual maturity. You have all heard of cock fights right? It really gets nasty quickly. Even those that have been together since the day they hatched will turn on one another in the fight for the head rooster ranking.  Some chickens are just downright nasty and some will attack the hand that feeds them without warning. Males can most often live together quite harmoniously if no hens are present but if they aren’t laying eggs then they are being raised for meat right? So you still have to feed them, house them, and then, butcher them. When it comes to roosters, there is no getting around the reality that some of them will have to be culled. You just have to decide when that is.

So why put myself through this?

I want organic, fresh eggs and so this is a reality that we must face. We made an agreement when we started homesteading that if we can’t do it ourselves then we can’t eat it at all. It certainly complicates your life when you start living by these standards. It is so easy to go into a super market and grab a package of meat or some eggs and absolve yourself of all though or responsibility about the life that produced these goods for you.  There is a life and a story all neatly wrapped up in that plastic tray though.  A life well lived? Poorly? Does it matter?

To us it does.

So although I tried to avoid it for as long as possible, in the end it came down to doing the right thing. Slaughtering an animal is obviously not a very nice thing to experience. You do it quickly and with as little stress to the animal as possible and then you move on. We give the animals a good life, the best life we possibly can and we feel good about that.  I am on the fence as to whether having animals is for us, but if we can’t do it, we can’t eat it either so it is a big decision.

Yesterday, armed with a healthy dose of practical thinking and before I could change my mind, we mobilized and caught the rooster. I held his feet and pinned his wings and Ryan wielded the axe (I am so grateful). Wood block and axe. Quick death. The body continued to move for a minute or two after the decapitation. It was strange. Surreal. I expected to cry but instead there was just this loud ringing in my ears and a numbness.

What about the other rooster? He fled and hid in the woods.  We went inside for a cocktail, happy that he’d had the sense to flee. He came back, of course, hours later, and after figuring out how to jump over the fence, he re-claimed his place.  Sadly, it won’t be for long.

Anyone want a rooster?

Thank you I needed to read this as I get the courage to do the same thing to our extra rooster! It was funny and humbling to read that you’d had done the same thing as us, and nice to know we aren’t the only ones! Today I finally took down our craigslist add of “Free EE Roster” and now I MUST do what I NEED to do!

Thank you for the encouragement! Now if you’ll excuse me… I need to go catch dinner.

Well said post! I really enjoy reading your posts Charlotte, they are full of knowledge from your personnal experience with a little humour for good measure. Your site goes above and beyond from what I’ve read from other blogs etc. I’m heading towards the direction you have taken and admire your experiences and hard work! Hear’s to a great 2018 season!