Awhile back, we bought a late 70’s Massey Ferguson 230 tractor to help us on the homestead.  You can read about how and why we decided on the Massey Ferguson 230 here.  What follows is an account of the experiences we have had with it.  Most of it has been great but there have been a few surprises. 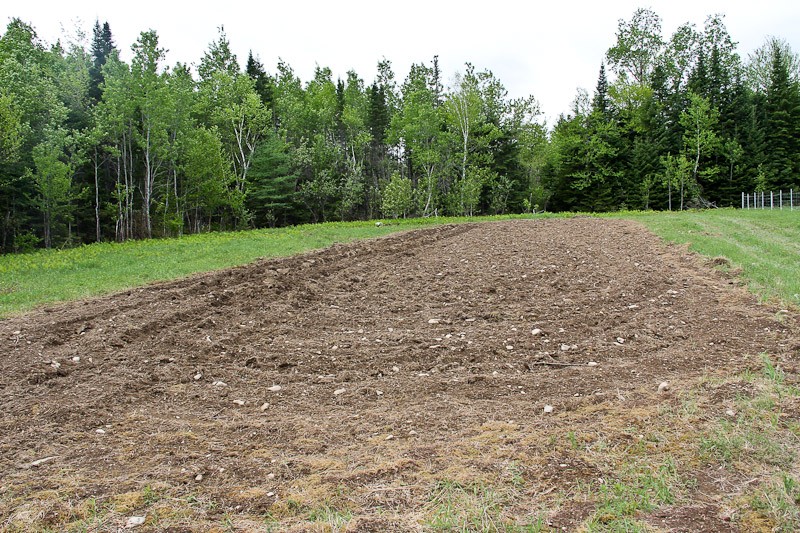 I plowed a new field, say 40ft x 120ft; it is now seeded with corn and potatoes (two good crops for newly broken ground.)  It was the most fun I’d had in ages.  It took a bit to get the hang of the plow .. at first I found myself getting hung up, but it was because I was plowing too deeply for the soil conditions (unbroken ground.)  Half an hour or so of experimenting and all was well.

As one who has not spent a lot of time doing farm type tasks, I found plowing to be extremely satisfying.  When you start, there is sod.  When you’re done, there is a field you can grow in.  In terms of seeing immediate results from your work, plowing is hard to beat!

I enjoyed it so much, I let my guard down .. which resulted in ..

Stuck in the mud

I’d just finished plowing the upper field.  The sun was still shining and the tractor running beautifully, so I decided to plow the lower field.  As per physics, the lower field was wetter than the upper field.  Lost in the sun and the wind and the sound of the Perkins diesel, I did not notice that I was driving into a mud pit.  By the time I did notice, it was too late, and all attempts to extricate myself were futile (the tires just spun.)  By the time I was done trying to escape, I was about two feet deep in the mud.  I had to laugh, as it was exactly what my friend Roy had warned me about when he said “get a 4×4.”  The Massey is 2wd only.  I tried towing it out with a pickup truck but was not able to do it and almost got the damned pickup truck stuck.  The only thing that kept me unstuck was the SHEER TERROR of the embarrassment I’d have felt at having to get both vehicles pulled out by someone else.

I took a halfhearted attempt with a UTV but ran into the same thing.  The problem was solved when, a day later, I related the story to my neighbor.  He came over (with another neighbor, to watch the show) and pulled me out with his tractor (about the same size, 40hp.)  Traction was an issue so he could not pull me out directly.  We ended up using his tractor as a “fixed point”, and then running chains to each tire of my tractor.  We tied those chains to the tire chains of the stuck tractor, and then I drove forward slowly.  The chains wrapped around the tires and it slowly pulled itself out of the mud.  Damned slick trick.  The only problem was that one of the chains slipped and wrapped around the brake line, bending it and reducing the massey to a single brake.  It’s still broken, but one brake is adequate.  One of these days I am going to pop it off, get it straightened and re-installed. 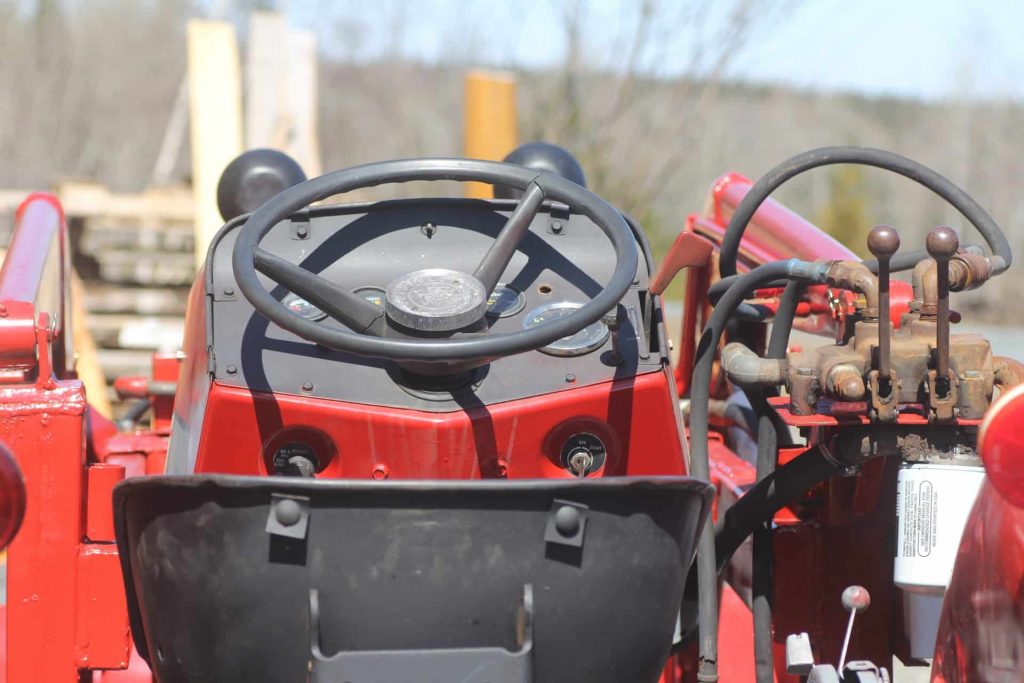 I was placing an order for some tools and happened across a replacement temperature gauge for the Massey.  The one it had was broken, and it always kind of bothered me not to have a temp gauge.  I woke up yesterday morning and decided “today’s the day, I am going to replace that gauge.”  And so it began.

I started by taking the engine cover off – this was straightforward, with the exception of one bolt which just turned, and would not come out.  It was also a size smaller than the rest of the bolts.  Eleven of twelve bolts came out uneventfully, but this one would just not come out.  I tried various things like vice grips and a pry bar, some penetrating oil .. and it would just not budge.

My wife happened by and we chatted briefly.  I relayed my problem.  She said “are you sure there is no nut on the back?”  I halfheartedly said “Bah, what are the odds?” while simultaneously thinking “Oh shit, she’s right, for SURE.”  She was right.  All the other bolt holes had nuts welded to the back of them, but this one hole did not, and the nut was loose.  The bolt head was also smaller than the rest .. so, at one point, I bet the nut came unwelded.  Someone fixed it by using a nut and bolt .. and they used a smaller bolt head to indicate “something is different about this bolt.”   It all makes sense now.

Engine cover off, I removed the battery in order to have more space behind the gauges.  Once it was out, I traced the cable from the temp. gauge to the sensor to make sure I was looking at the right thing.  When that was done and I was sure I knew what I was looking at, I disconnected the old gauge and ran cabling for the new one.  At that point I had the new system sitting in parallel with the old, it just needed to be connected.

I decided to do the sensor end first.  I found the proper wrench for the sensor, and started unscrewing it.  Dirty, watery, OILY liquid started pouring out of the sensor hole.  Now, this is not what I expected – I expected clean green antifreeze.  I figured I must have pulled the wrong thing out or something but .. there is only one temperature sensor so.. I traced it out .. how could that be?  I re-checked diagrams, re-verified that I was indeed cracking the right thing.  I was.  So how was I getting the black stuff?  I re-cracked it and was pleased to see a nice bright green stream.  I think a  little bit of dirty fluid had pooled at the bottom of the coolant tank or something.  Might not even have been oil – it was just black and dirty looking.  I am going to keep an eye on that to make sure it WAS just dirty water, and not some leak between the oil/antifreeze systems.  Apparently that’s not a good thing.

In any case, I took the old sensor out, using my finger to stem the tide of gushing antifreeze.  I then hurriedly jammed the new sensor in, hand tightened it and quickly got my wrench in place to tighten it back up (it’s gushing, mind you, all the while.)  The bloody wrench did not fit on the new sensor because the new sensor had a slightly larger head than the old one.  For a brief moment I was convinced I had spontaneously forgotten how to use a wrench — it just would not go on!  It was a few seconds before I thought “I bet ‘those pricks’ made the replacement head size different from the original.”  I unscrewed the sensor, kept my finger in the hole to stem the tide and sheepishly yelled for my wife to come and drag over my wrenches.  I found the right one, and it went in uneventfully.  It was 5/8th, whereas the stock one was in metric (or vice versa, I can’t remember which.)

Crisis over, I needed to wire the sensor and install the gauge.  This was uneventful and I had it done in twenty minutes or so.

Everything in place, I decided to fire up the tractor to make sure everything worked.  Rather than put the battery back in, I used jumper cables in case I needed to make changes.  I tried to fire up the tractor, and instead of ignition I got sparks and a bit of smoke off of the negative battery terminal.  Wonderful!  A little bit of google sleuthing indicated that that is a symptom of bad battery connections.  I re-adjusted the jumper cables and tried again – same thing.  I re-installed the battery and re-attached the battery to the tractor terminals, tightened everything up, said a small prayer, and turned the key.  It fired up as per normal.  Whew.  Crisis averted.  I sat around for a few minutes. ,waiting for the gauge to go up. . Nothing .. nothing .. and then about six or eight minutes it, it started moving as the tractor came up to operating temperature.  Success!  The temperature gauge worked.

At this point, everything was working, and all that really needed to be done was to put the engine cover back on.  And so began the hardest part of the entire job – getting the damned engine cover back on.  It’s sixty or eighty pounds, made out of sheet metal, large, awkward, and drilled such that things need to be pushed and prodded into place before the nuts will go in.  Picture trying to bend an eighty pound piece of sheetmetal while simultaneously pushing the frame, while simultaneously screwing in the nut.  It was not fun at all, and in the end, took two of us about an hour to do.  I am sure there must be some trick to it but MAN, what a nasty job for one who does not know the secrets.  I am going to need one hell of a good reason to open it up again, let me tell you.  I was looking at a shiny new tachometer but have since decided that my ears will suffice. 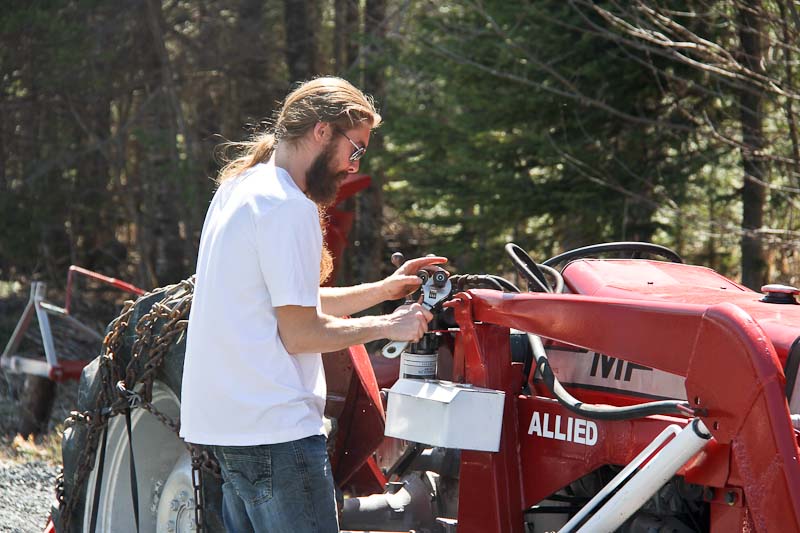 I came out one day to find a small pool of oil on the tractor.  I looked for the shine (fresh oil), and found it right at the hydraulic controls.  Right above the controls was a hydraulic quick connect fitting that was leaking.  I wrapped a towel around it, sourced a new fitting and installed it, needing only a couple of wrenches and a bit of elbow grease.  It was trivial.  One of my main cylinders needs re-packing, so that is on the list.
—-
All in all I am happy with the tractor thus far.  There are definitely ongoing maintenance tasks  but that is part of the deal with a tractor of this vintage, and I knew that going in.  All of the problems I have run into have been addressable at home, with basic tools, at low cost.  And I’m actually enjoying it, and learning in the process.

I do sincerely hate the engine cover though.  That thing is designed to infuriate.  I’ll tell you, if a racoon crawls up and dies underneath that engine cover, I might just let it decompose rather than take the cover off.  “Don’t mind the smell of raccoon corpse, it’s either that or taking the engine cover off.”

Most people would probably wonder at the wisdom of this decision.  An owner of a 1970’s Massey Ferguson 230?  They’d just nod in understanding.  “Yep, that bloody cover, eh?  I’ve got two dead squirrels myself.”