For a person not raised on a farm, or around machinery, the selection of a tractor is full of considerations. It is easily one of the most important homestead purchases one can make and will probably represent a substantial financial investment. Time, patience and care are required to find “the right one.”

A big part of picking a tractor has to do with your land – if you’re working a small amount of land, you’ll probably want a small tractor. If you’re working large amounts of land, you’ll probably want something larger (and probably don’t need my entry level advice!) Of course, as with almost everything, rules are made to be broken. If you have to wheel around in a tight orchard, you’re going to have different requirements than if you’re operating in open fields. You may opt for a small tractor in a large orchard, simply because a large one would not be able to move around. You may opt for a larger tractor even with only a few acres, because you need to run a large wood chipper and splitter, and a smaller tractor would not suffice.

Another big factor in the selection of your tractor is considering the type of work you want it to do. If you want to maintain lawns and do the odd bit of snow blowing, your requirements are going to be rather different than if you want to do woods work, with big trees, or work on uneven rocky ground.

In considering various tractors, I had occasion to speak to a number of people who had some experience in the area. I asked them for their thoughts.

My friend Roy insisted that I get a 4-wheel drive tractor, telling me that “2 wheel tractors are just no fucking good, you’ll just spin. You want a 4×4.” He gave me this advice early in my search and I took it to heart, more or less eliminating anything that was not 4wd from contention. This was a mistake, and ultimately I ended up with a 2wd tractor! However, there is wisdom in this statement. You probably can’t go wrong by going 4×4, though you can certainly go wrong with 2wd.

A neighbor seconded Roy’s comment – 4×4 all the way! He was biased though, as his tractor was mostly used in the woods.. hauling logs .. in mud and dirt, across slippery, uneven terrain. Of course he would recommend a 4×4 tractor! He also stated “a cab is mandatory”, but again, that was because he works in the woods, knocking down trees, and works in all kinds of weather! It’s not bad advice but for my use case, it is not entirely applicable. I’ve got six or seven acres of flat ground .. I am not going to be doing any extreme tractoring. When the weather gets really tough, I’ll go inside and write about it.

“Bah! In my day it was one wheel drive and it was almost too grippy.”

“Well for some things, yeah. But not for you.”

“What about in the snow, and on ice?”

“How much woods work are you really going to be doing?”

“How many days are you going to be working in the mud?”

“Do you know how reliable some of those old Massey’s are?”

At the end of our conversation, he’d pretty much steered me away from seeing 4×4 as a necessity. He showed me that my concept of what a 2wd tractor could do was quite erroneous. They are much more capable, traction-wise, than what I had understood and been led to believe.

With all this advice in mind, I went through some more factors.

New vs. Used: Used, for sure. I think the price of new tractors is absolutely ridiculous, especially for a homesteader.  Even for small tractors you’re into tens of thousands of dollars.

Even the idea of paying tax on that size of purchase is enough to make me want to buy used. The hosers we have in Government don’t need more funds – they’ll just use them to get us into more and more trouble. Paying thousands in unnecessary tax just serves to feed an already overfed, ill performing beast.

For size, I evaluated everything from a cute little twelve horsepower walk behind tractor all the way up to a 100hp 4×4 Zetor. Arguments could have been made for each, although those two extremes were quickly thrown out. The range was narrowed to somewhere between 20 and 75hp. This was quickly narrowed even further to between 20 and 50hp. At the lower end of the hp scale, I found numerous Kubota models that were rather nice. For a long time, this is where I was focused: 20-35hp 4×4 kubotas. I inched closer to the 35hp side of things, judging the 20hp to be a bit small for our needs. I was never able to find one at a price I liked – the secondary market is very tight here (New Brunswick) and I believe this size of tractor is rather in demand.

Eventually I broadened my scope to include 2WD tractors and “the world opened up.” All of the sudden I had access to a great many tractors, at prices that were closer to what I wanted to spend ($10Kish.) Many of these tractors were old school 60’s and 70’s farm tractors. A certain nostalgia immediately crept into the entire affair. It is silly to say but I saw myself atop one of the old models, an International or a Massey Ferguson, much moreso than the newer ones.

Perusing a new batch of possibilities, I considered further criteria.

I’d insist on diesel, as it’s an all around better option for this type of vehicle (and probably for most types of vehicles!) Cab?  Optional.  A loader? Required. PTO? required. Some of the older tractors did not have PTOs on them.

The tractor I finally settled on was a late 1970’s Massey Ferguson 230, 40hp (35hp at the PTO shaft) 2-wheel drive. The Engine on this 230 is a 3 cylinder Perkins diesel and amongst diesel aficionado, it is highly regarded (like Cummings, or Cat.) Words like bulletproof and “impossible to break” are commonly used when describing this engine. It sounds great, too; powerful but refined. It did not come with a loader, but I found one, an Allied 300, which was compatible. 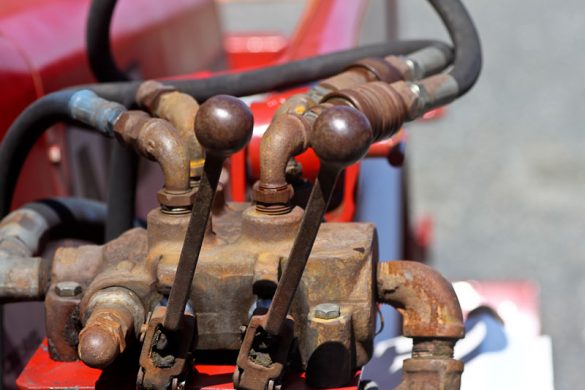 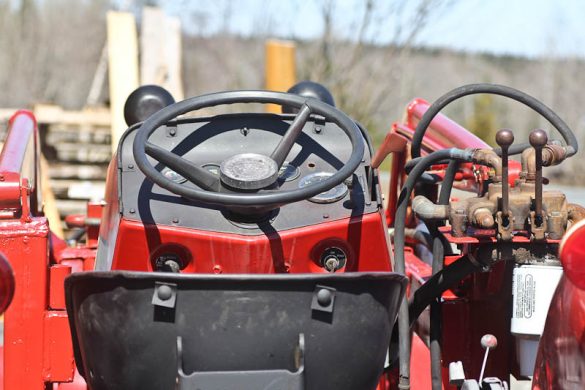 Built in the 70’s, it was manufactured at a time when owners were at least somewhat expected to do their own wrenching; the engine is known for being relatively easy to work on. Spare parts are not hard to come by, and they are also not expensive. I expect operational and maintenance costs to be quite reasonable.

My costs for this tractor:

I cannot say whether or not my logic nor my ultimate decision were the right ones, as the tractor has not seen any real use yet.  Time will tell.

But I’m betting the old girl does great.

Potager Gardens and The Benefits of Polyculture Gardening

Organizing The Homestead: The KonMarie Method