Some things should come with a warning label. Quail for example. Or maybe it’s us. Regardless, I love sharing the happy stories about our homestead experiences. But sometimes bad things do happen.

It all started In July. We brought home seven Coturnix Quail; 6 female one male. This was entirely Ryan’s idea (I just had to add that in). They were teeny, and fluffy and I had never held a bird before. We prepared their pen, water, food, pebbles in the water because we were warned that they will drown themselves in their water bowl. Oh boy.

We were attentive. They mostly sat around eating and watching. For some reason they didn’t like me. All fourteen beady black eyes would stare at me all at once then they would bounce for no reason almost breaking their necks on the roof while I changed their water or food. I screamed and dropped the lid once, and probably almost killed a couple. Also, in my opinion, their poo/urine smells really bad. I could hardly stand it. Which lead to over cleaning of their cage and a vicious cycle. 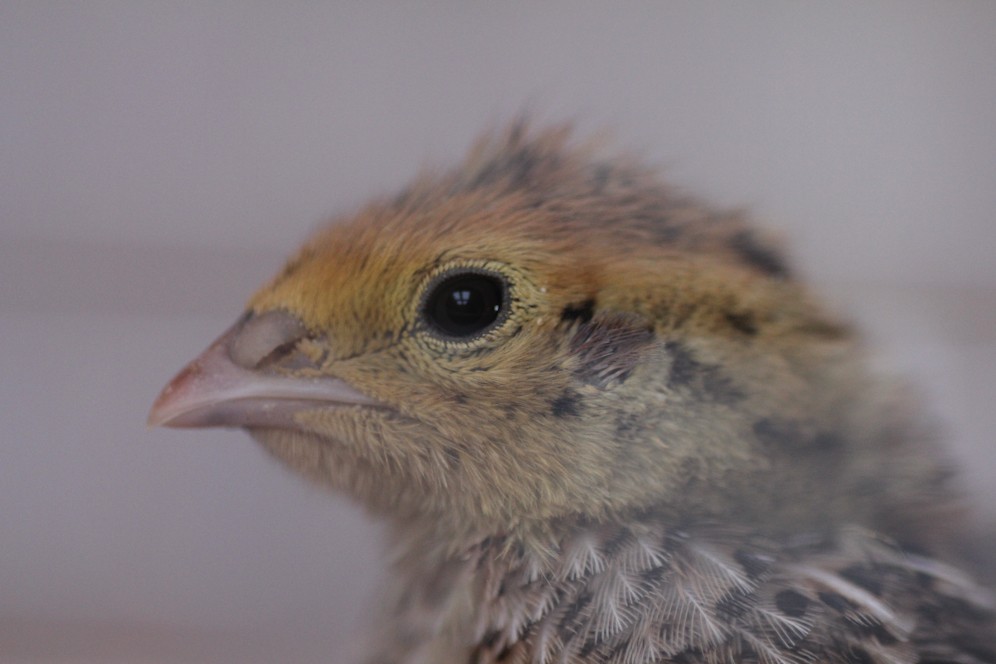 I soon got banned from Quail duties because of … all of the above.  They would be calm as cucumbers around everyone, but me 🙁

Soon they were producing eggs, six per day quite regularly. The eggs were fantastic, certainly a novelty for us and Ryan decided he wanted to start keeping some for meat as well.

He started working on getting a new building and building cages for them and we purchased an incubator. We hatched 40 adorable little fluff balls.  It was quite remarkable to see them wiggling out of their shells, their eyes opening for the first time and hear their first little peeps. 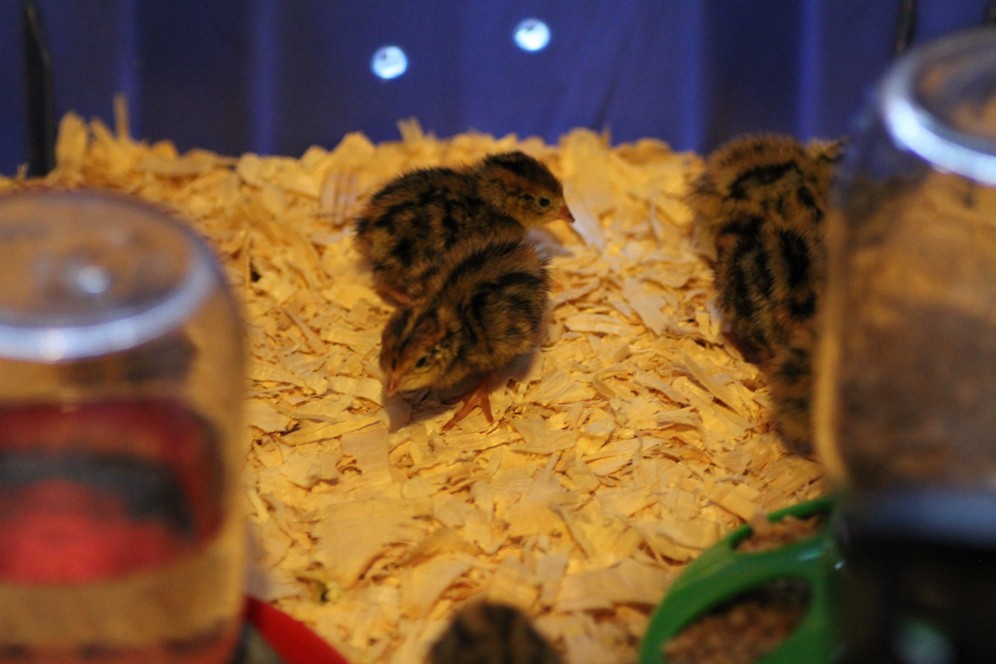 They started dying, one after the other. Within 48 hours of them hatching, we had lost half. We tried everything. They would just lie down and slowly die. Heat was good, they had food, we dipped their beaks in water to teach them. They were active, playful, had a nice cozy box with bedding and a warm brooder to cuddle under.

At some point we read that high mortality in chicks is common, and the remaining twenty were thriving. This did not sit well with us and we certainly did not want to relive that again. 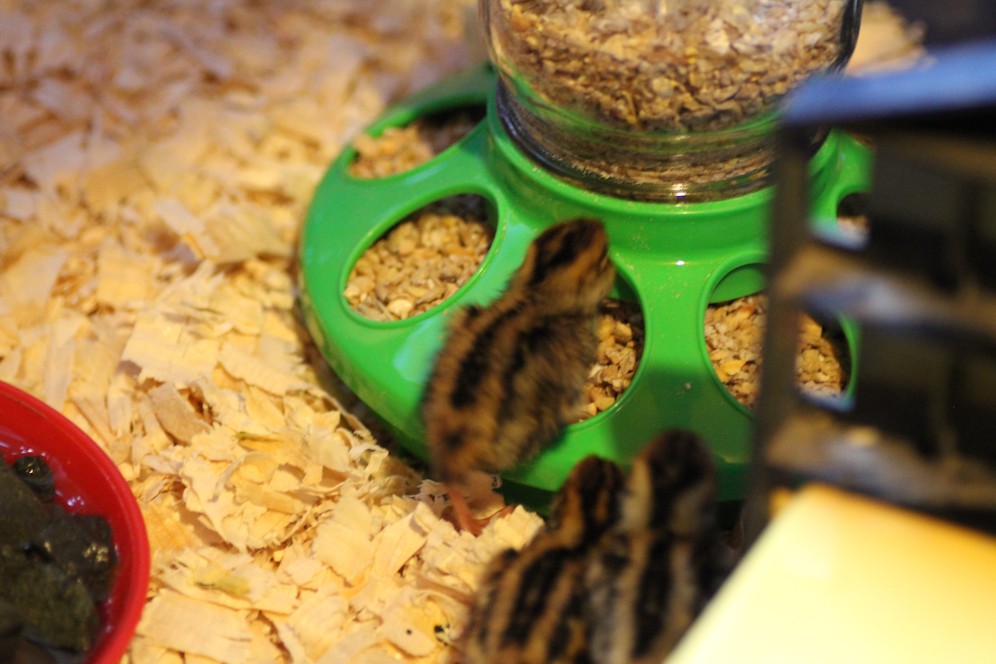 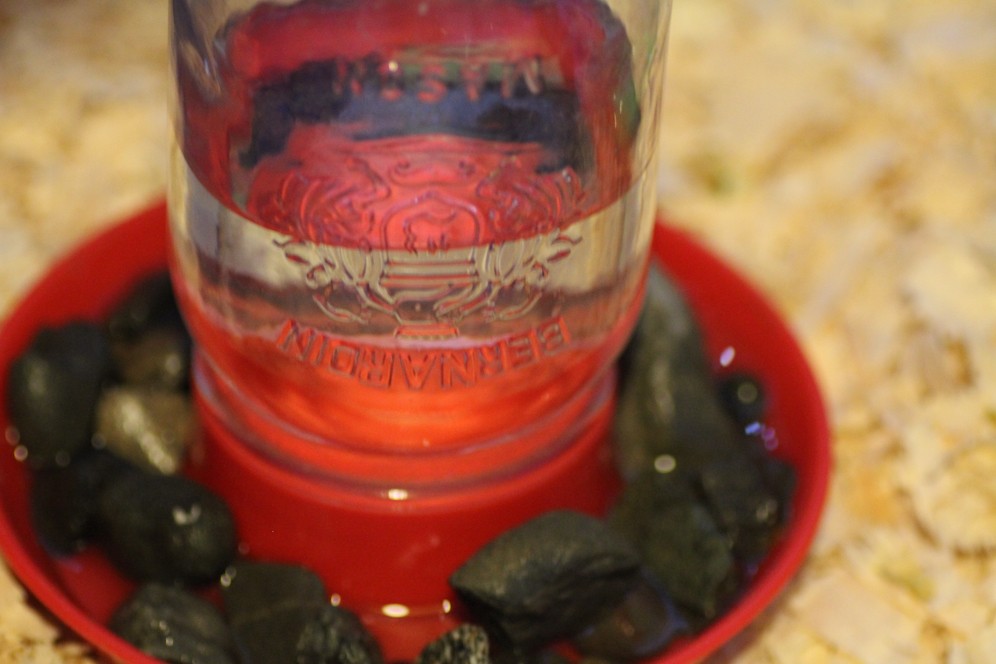 pebbles in the water to prevent accidental drownings

Meanwhile, out in the big quail cage, something terrible was happening. Our Seven mature quail were embroiled in a battle to the death. They were murdering each other. A day or two earlier, We noticed the smallest one being aggressively picked on. The bully and the victim were both removed.  The removal of these two Quail, led to very unexpected consequences. Perhaps this was a coincidence?  They all ended up in the freezer. 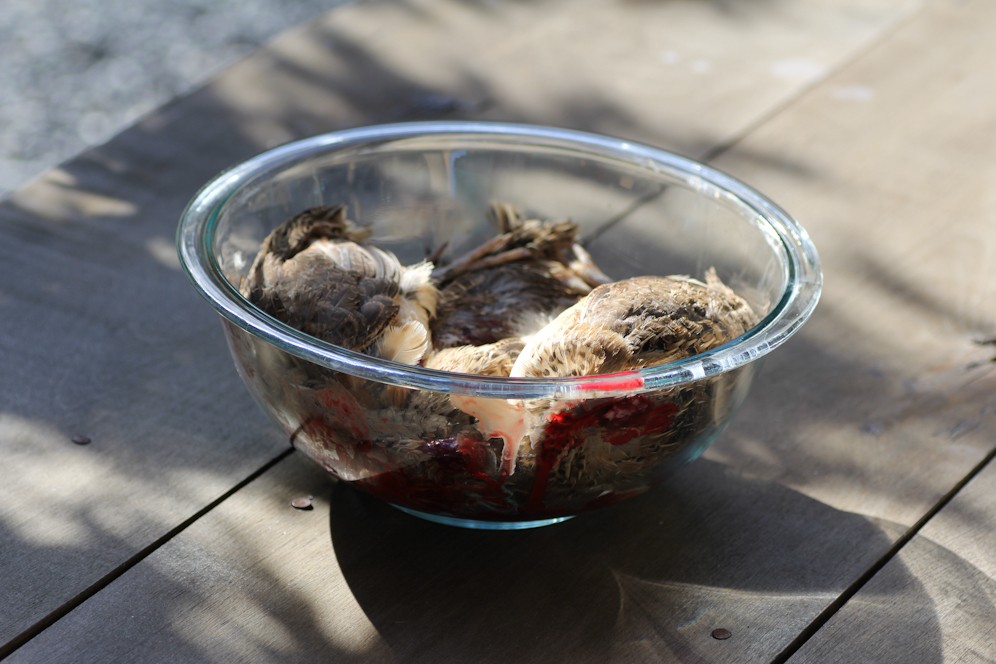 Not knowing when to take a break, we hatched 40 more.  We were extremely diligent with temperature keeping them in the house and of course doing all the other things I mentioned earlier. This time we had only one fatality. Thank goodness. After a couple of weeks, they were rambunctious and starting to pick on each other…big time!  They look cute but they can be brutal to one another. They needed more space. We moved them out to the new quail house, set up the heater, the food, they seemed super happy …played and slept all day. It seemed to be working out. 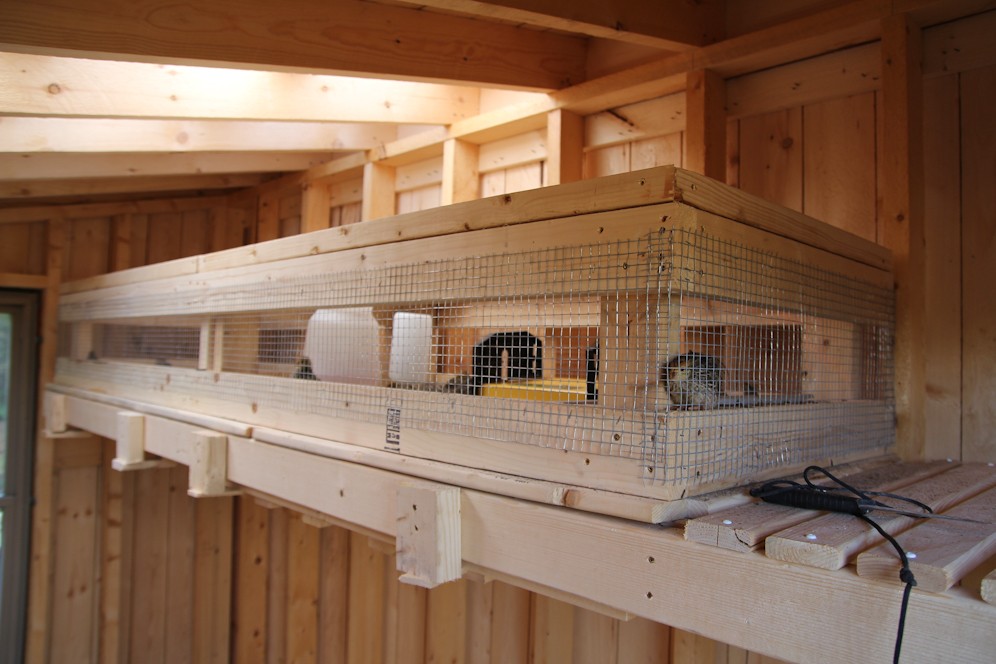 The Quail house has lots of light, air, space.

The next morning we went in to check on them and discovered all 40 dead. This was incredibly horrible. A draft got underneath them and the heaters were just not enough. Stuff like this lingers with you for a long time. I cried. I threw up. I cried some more. Then I cleaned it up and we cremated their little bodies.

Today we have the twenty Quail that survived life with us. They are living, eating & pooping happily in their custom made cage. They stare at me when I come in replace their water. They hop around a little bit too, but  I think we are all getting used to one another.

They should be in the freezer (the boys) and the girls should be laying eggs but none of this is happening. It’s winter and I am just going to keep feeding them.

Anyone want to buy some Quail?

I really love your stories! Keep them coming! Hugs, Diane

Maybe in the spring

I suspect so for eggs! Just have to be patient.