Last we left off, Walkerland was successfully up and running with a grid tie/off grid solar system. The system consists of of 30 x 250 watt panels (7.5 kilowatts), a 770 Amp Hour battery bank, Outback power gear in between. Everything has been working flawlessly. We have had no problems with it. There was a small software glitch pertaining to the reporting of the battery level status, but this was fixed in a recent software update, and was not really a big deal to begin with. 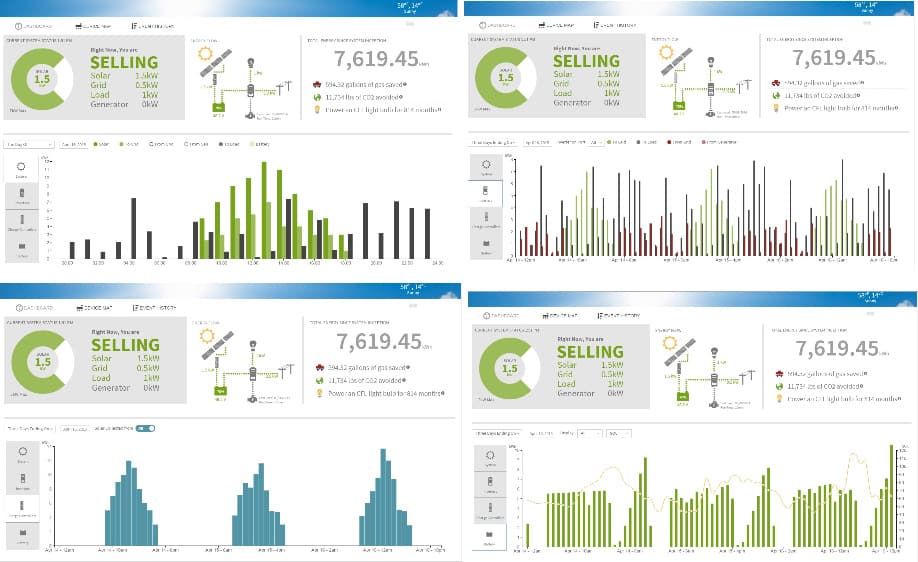 This is an example of the Outback OpticsRE interface – the stats shown here do not represent our homestead.

Outback power recently released something called OpticsRE, a major software update to the outback platform. It is very notable. When the system was new I was quite excited to set up the reporting side of things. As a computer guy I was keen to get into the more technical aspects of the system and see what it could do. I was flabbergasted to discover that aspects of the software were about two decades out of date. The data export technique they were using (dumping data out of a serial port) is archaic. It would have been old in 2000. I almost called up their technical staff to heckle them. Serial output only, in a “state of the art” solar management system? No snmp, even? That’s like finding a coal fired steam engine in your new Honda. Prior to the new software offering, people were buying software from other vendors to get something usable.

Outback redeemed themselves with their new software offering. OpticsRE seems very good. It took me an hour or so to get it working and it provides me with exactly the kind of information I want, all laid out beautifully. I can see all kinds of things with OpticsRE, including:

It’s a hosted solution, meaning your Internet connection must be up in order for it to work.. however, much of the information is also available through a local web server (on the Mate3 controller.) The local data is not as pretty nor as comprehensive, but the critical bits are there. I would like to see Outback Power supply the OpticsRE server software so that equipment owners could run their own systems. As it is now, I have to be part of Outback’s software system in order to access Optics RE. They should supply the software to end users, so that I could run my own instance of OpticsRE.

Small gripes aside, I love this software. It’s really well done. Charlotte is less enthusiastic. You see, with OpticsRE, I can see exactly how much power we are using. Every time we flick a light switch or use an appliance, I can see the impact. Last night, for example, Charlotte was watching a movie, as she cooked dinner. I chimed down “Are you trying to bankrupt us?” “Do you realize you have increased our energy utilization by some four hundred and fifty percent?!”

It is very interesting to observe the patterns of energy use, and to see exactly how much power a given device uses. One thing that is very surprising to me is how little power computer displays seem to use. I always felt slightly decadent, from an energy perspective, for having two displays. In actuality there is no need for this guilt.

OpticsRE helped me discover a 300w power leak, almost immediately. At our home, we have three heating systems: indoor wood stove, outdoor wood boiler/in-floor heating, and electric/in-floor heating. We use them in that order of preference. The wood stove is good for the fall, into winter (we are still using it, as of Dec 1.) As it gets colder, we move to the outdoor wood boiler. As an emergency backup, we also have electric, but never want to run that, due to the high energy cost. In any case, I left power on to a couple of pumps, and to the AC circuit that powers the thermostat. Because we’re heating with the wood stove, I didn’t need the thermostat, and I didn’t need to run the circulating pumps. I decided to shut it all off to see what it would do to our energy consumption and the savings amounted to 300 watts (running 24/7). That is a significant unnecessary drain. How significant? Costwise, it’s 7.2 kilowatt hours per day, or about eighty five cents per day. That about twenty dollars per month, or $240 per year. Now, I wouldn’t run any of that in the summer, so let’s say the real savings is more like $150 per year. Not quite as impressive, but not bad for flipping a switch. Thank you, OpticsRE, for making me see just how much energy I was wasting.

Get Your Power Usage Under Control

If you want to “get green” and possibly go the solar route, my suggestion is to first get your power use under control. There are many tools, cheap and expensive, blunt or comprehensive, that can really help you get a grip on your power needs. Generally speaking, solar will do you little good and frustrate the hell out of you, unless you have very efficient energy consumption patterns. That is one “secret” to this whole solar/off grid thing. You have to be VERY conscious of which devices are using what power. Your appliances HAVE to be very energy efficient. You CANNOT heat with electric. Big televisions take lots of power. Electric clothing driers are HORRIBLE consumers of electricity. 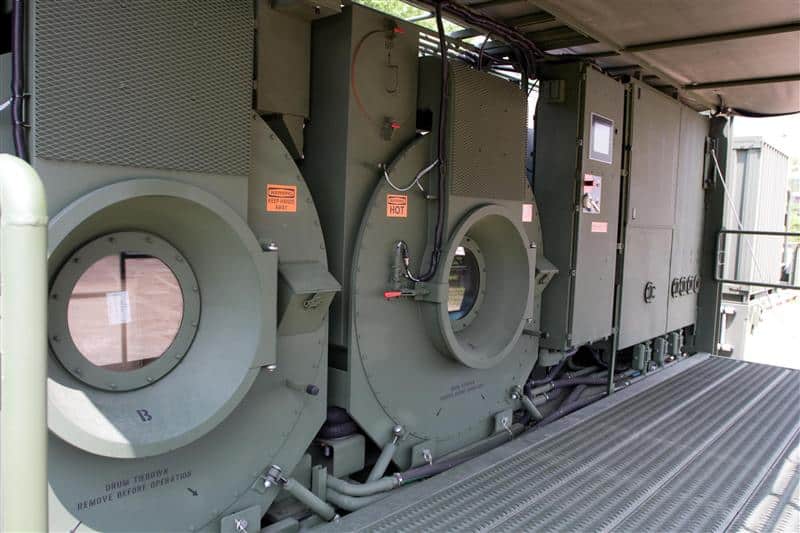 photo credit: guildassociates.com. This is not exactly the same as the dryer we were looking at but it gives you the general idea.

Speaking of driers.. awhile back I found a diesel fired military dryer for sale. It was a huge green thing .. mounted on a trailer .. built for the outdoors .. probably could not be lifted by fifty men .. good price too! It was meant to do squad sized loads of laundry, in war encampment conditions. I thought it was awesome and was starting to consider things like placement, fuel tank and pump options, etc. Charlotte got wind of it and was absolutely, loudly, staunchly opposed. Apparently the ability to do one load of laundry per month (while under small arms fire, no less) was not of interest to her. Personally I think she made a mistake. What a great conversation piece.

“What is that, a mobile fallout shelter?”
“It’s the dryer.”
“What the hell are you drying?”
“Anything you want, my friend. Anything you want.”
Like that wouldn’t have been cool.
–

In working on our energy consumption, we have figured out that we can both be at our computers, listening to music, lighting our rooms, receiving heat from the indoor wood stove (that has an electric fan), and use roughly 750 watts of electricity. Now, at that consumption rate, it feels like we’re living in a dungeon, because there are no lights on. A more reasonable rate of consumption, with the house lit warmly, is closer to 1250 watts, or 1.25 kilowatts. For winter time, in Canada, an energy consumption rate of 1.25 kilowatts/hour is pretty damned decent. If we replaced all of our lights with LEDs and moved from standard PCs to lower power units, I suspect we could cut it in half again. In the event of an extended power outage, where there was no sun at all, I figure we could go about thirty hours on battery power, if we went into “dungeon mode.” We could double or triple that if we turned off everything not strictly necessary, I suspect.

The OpticsRE software is very handy in keeping on top of this. I have two computer monitors and one of them has a full time display of the OpticsRE web site. I can see that at this moment we are using 880 watts, less than 1kw. I can see that the battery bank state of charge (SOC) is 100%, and has been for the last 24 hours (so there have been no power cuts.) I can see our panels are producing a measly .05kw, as it is a very overcast day. I have one click access to drill down into a bunch of other items, as well as access historical data. It’s really quite good.

A key component to the whole renewable/green energy/self sustaining thing is energy consumption. If you don’t consume the energy in the first place, you don’t have to worry about sustaining it. The better you are at this, the less energy production you can get away with. Some things you can focus on that will reduce your energy consumption include:


I cannot underscore how important this part is. Your energy awareness and philosophy must be correct if you are going to ever successfully make a go of the energy limitations of a reasonable sized solar array and battery bank. The panels and batteries and inverters .. those are just tools. If you ask too much of them, they will not work for you. Trust me when I say that the most important part of solar design is you, and your energy use. Start there.

If you found this interesting your might also like reading: Solar Energy on the Homestead; Update #1  and Household Budgets: Analyzing Expenses, Cost Per Day Budgeting.

When a Minor Language Gaffe is Front Page News…